Tailgating For the Win: Football Tailgating by the Numbers 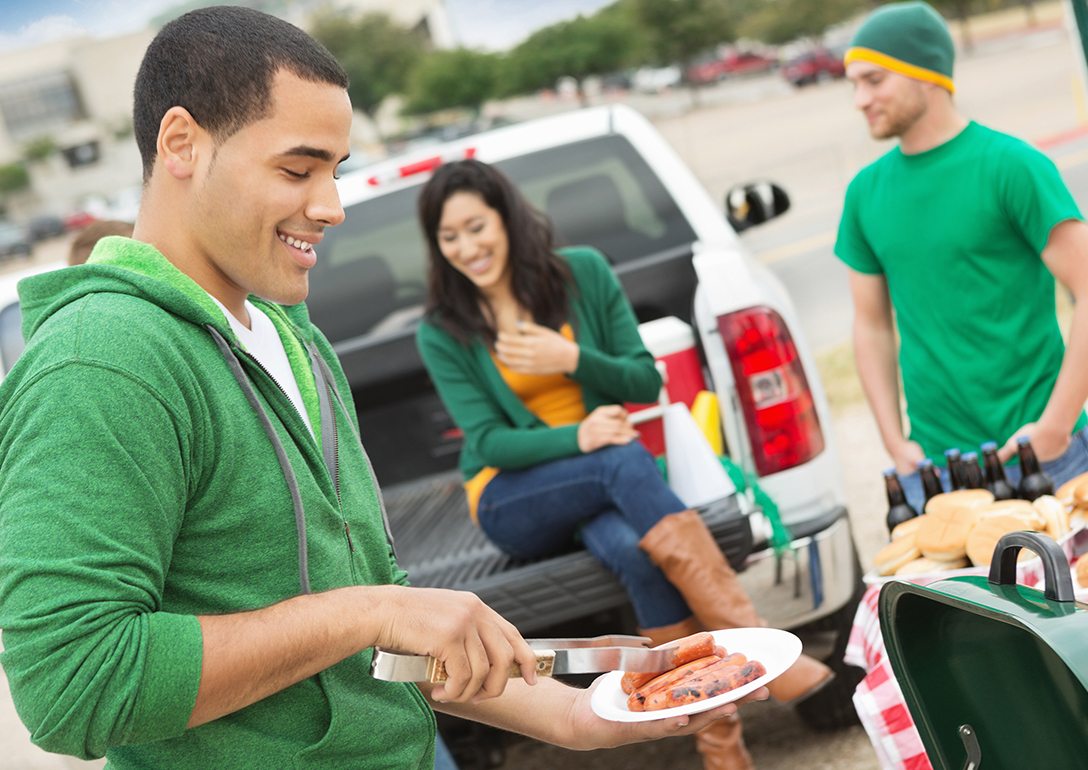 Outside of football stadiums the nation over, in colleges and professional facilities alike, tailgaters are gearing up for another Sunday of fun, food, and camaraderie. This pastime isn’t just good fun; it’s also good business. Tailgating isn’t a newfangled trend. In fact, it’s been popular since an 1869 game between Princeton and Rutgers. Yale claims to have invented the tradition in 1904.

Most tailgaters spend $200 or more on supplies each season, and 42% of them spend over $500. While that’s a nice chunk of change, it’s a drop in the bucket compared to what the 200K party-mobile die-hard (and spend-hard) fans are splurging on.

95% of these sports fans cook their own party foods, but more and more of them rely on restaurants to bring their A-game. Grills are ubiquitous, but more restaurants are closing the gap between marketing and income potential. High-end eats are popping up to compliment classy tailgaters needs for fine food, drink, and of course, chandeliers.

Bring in the Ringers

On the more modest end, restaurants are starting to play ball with catering packages like Bojangles’ Big Bo Box which is vying for #1 seed against the reigning champion of portable grills. Restaurants can offer more value by selecting catering packages that save tailgaters time and money. Tailgating is one great way to develop a loyal following of customers who you might otherwise miss.

Ultra-luxury tailgating vehicles aside, tailgating is about a show of teamwork and generosity, with many tailgaters using an army of grills to prepare food for friends new and old. Free food is often given out, which makes it an excellent opportunity for restaurants to show up and offer delicious fare that gets the word out about your restaurant, while showing fans that your restaurant also roots for the home team.

Who tailgates? Here’s a look at tailgating demographics and stats: Tailgating is a hobby favored by adults more than kids, and men more than women. 4% are between 12-20, 60% are between the ages of 25-44, and just 9% are over 55 years old. 78% are men, and 22% of women show up on game day. They’re more likely to have college degrees (that helped them hone their tailgating skills in college) and more than half of them arrive 3-4 hours before the game even begins.

48% of tailgaters go to a game 6-10 times a season, and although husbands tend to show up more, 46% of married tailgaters work together to get food for their team.

Grills of the Gridiron

At most tailgating events, smoking is optional but encouraged with more than 2% of attendees bringing their smokers. 39% use a grill to cook, 1% use a stove, and 59% will use a combination of all these cooking devices to make their tailgating feasts. Most tailgaters will spend between $200-$500 on tailgating supplies, food, and drink throughout the season.

Webber grills of every size are well-used in tailgating affairs, providing much-needed heat for fans in colder climates.

Tailgating is a popular phenomenon that extends the opportunity for restaurants to entice sports fans with great food and regular promotions. Tailgating generates millions of dollars and millions of fans per year who are anxious to root for their favorite teams with their favorite food and drinks in hand.

As the cost of professional sporting games go up, the escalating costs of tickets, parking, concessions, and drinks have many fans staying outside the stadium to be among fellow fans and celebrate the season while hoping their team scores another victory.